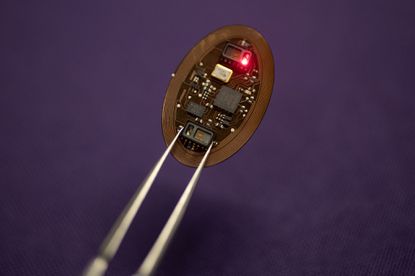 A Northwestern University teacher has built up an implantable gadget that would regulate the medication when it detects an individual is overdosing.

It’s difficult to think something so little can spare lives.

“The naloxone ready to be delivered at the appropriate time,” says Northwestern professor of biomedical engineering John Rogers.

A bodycam video shows naloxone being directed by first responders. The medication quickly turns around the impact of an opioid overdose.

“Typically, opioid users are alone when they overdose,” Rogers says.

That is the reason Rogers and his group on the Northwestern campus – together with a group from Washington University – are building up the embed that is smaller than a pacemaker.

“We can sense when there is the onset of respiratory failure associated with an overdose. When we sense that his happening, then the we, as in the device, deliver (or) automatically releases the naloxone,” Rogers says.

The gadget doesn’t simply deliver naloxone it will likewise make a cellphone call to first responders to come help the individual who’s overdosing.

The thought won a $10 million grant from the national organizations of wellbeing as the feds would like to discover a solution to the opioid crisis.

“We know that many people who have achieved recovery had failed repeatedly before they do so, so if it does save lives in the process, that’s great,” says Amita addiction specialist Gregory Teas.

Teas says it’s indistinct precisely how the new technology would be utilized.

“The question is who would be receiving it. It would have to be people who acknowledge that they have an illness who perhaps have failed at other stages,” Teas says.

“You could ask the question, do airbags in cars lead to more aggressive driver behavior? I don’t think so,” says Rogers.

Under the NIH grant, creatures testing will start one month from now, and the Northwestern group is focusing on human clinical preliminaries within three years.